One of the few elements of “osu!next” design we haven’t yet made public is the results screen. I’ve been working on this in the background whenever I get time, and am almost ready to reveal the first iteration. Keep in mind this will still be missing some design elements which we need to add more framework support to make work.

Part of the work I did today was a refactor on loading rankings into a leaderboard, as we will be reusing the leaderboard display on the results screen.

You want a preview? Ok, fine.

While the visual effects aren’t in yet, I’ve started moving the HUD elements to the correct place on screen. This include finally moving the combo from the bottom-left location. Keep in mind you’ll be able to customise all of this.

jorolf has been working away on the beatmap details panel which will sit in song select. I’ve been reviewing the code and trying to mould it into a usable state and I think we’re almost there. You should see this live very very soon. 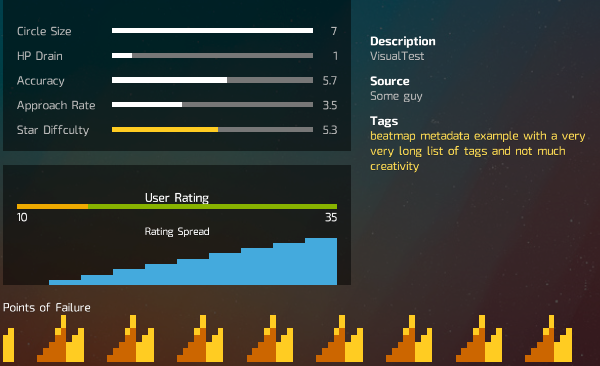 Unfortunately there was no one available to review my code so there won’t be a new build going out today.

For those that haven’t been following, we are enforcing strict code review guidelines which means that no build can be published without one other core developer approving it. Currently there are only three of us with the knowledge of the larger picture (and how the framework works inside-out) but I hope to add more people to this group as they pick up the project and become adept at identifying potential issues with peoples’ code.

Entries for the fan art contest we announced recently have closed and the results are up for voting. There is some amazing work, so I urge you to go check it out.