Was hoping to post Q&A on the weekend, but didn’t make it due to a mixture of catching up on sleep and handling a backlog of osu! internal affairs. Things are back on track now.

Rather than answering every question that came in last week I’m going to split them up, as there were quite a few (and a few longer answers in there).

@ppy do you drink or eat while coding? –PunciaRaomc

When I’m focused on coding a rarely eat or drink. Usually I’ll take breaks in between and eat/drink while consuming my few youtube subscriptions. I don’t find it so easy to multitask coding with anything else (except listening to music).

Until I find a feasible way to maintain it to the level I’d like, I don’t plan on spending any time on it. Honestly I’ve been trying to find someone willing to take over the project, but that’s easier said than done. My focus is on bringing osu! to iOS again, but using the same codebase as PC.

I wouldn’t say I’ve “dropped” it. I will keep it running and support existing users, but I don’t plan on providing new content for it because I simply can’t. I don’t have the time.

@ppy Any plan for 10 year anniversary?! I know its still 3 years away :P –Abrian_MA

I’ve probably used this answer quite a few times already, but I simply don’t plan ahead that far. I guarantee we will do something that everyone can enjoy.

Also holy crap, 10 years. That will really be something :).

@ppy what would the support team want me to write in order to get a sensible response and not an automated appeal denied mail? #peppyqna –availzu

The truth. All the truth (not just some part you think will make us happy).

@ppy Where did you start when making osu!. like, how did you get people to work with you? –osu_poseidon

I did everything myself for the first few years, basically. The best way to get things done is to not rely on others for anything. I still have trouble finding reliable and motivated people. Most people who are highly skilled (especially with software engineering) are already working on their own projects.

@ppy is there actually a score reset coming up with osu!next? –OzzyOzrock

We will do our best to never reset scores unnecessarily. I don’t see why we would with osu!next, as it’s basically just a design change.

@ppy why is your name peppy –Notifyosu

I was a huge starfox 64 fan back in primary school. It stuck.

@ppy How do you feel about the osu! community being mostly anime or japanese culture fans? –BTRyomegA

How the community forms is completely up to you guys. I don’t really have any opinion on it.

@ppy Curious on DCMAs (tweeted ya before) Are people sastified to see their music used into osu beatmaps or are they piling up this year? –Skyperial

I’d say there’s a mix of both. Most DMCA requests come from record labels, not artists directly.

@ppy did you ever get your own private jet from Osu! coins –PianoKid428

No. That was a joke. osu!coins never made any money.

@ppy Since osu! is going to be open-source, does it means it will be supported on all OS? –aryo_adhi

It means that people can help it become more supported on more operating systems. Opening osu!’s source alone will not change anything as far as the code or compatibility is concerned.

But worry not; we are working on making osu! more cross-platform in parallel to our open-sourcing efforts.

@ppy about osu!next, is there anything dealing with a visual update of osu!mania? Are there any mechanical changes coming with it? –Scalariform

Yep! osu!mania will be re-skinned just like all the other modes. Everything will be new :).

@ppy Any interest in making a SoundVoltex like mode? –BrojosB4Shojos

Hmm, basically osu!mania with added analog controls? Personally I don’t have any intention to do so, but it could easily be added as an optional key-mode to mania without making a full new game mode.

@ppy Any chance of combo flame or something similar to that in osu!next? –LuizHMS22

We’ve been experimenting with effects to replace the old combo fire, and I guarantee we’ll come up with something impressive. Of course, it will be toggleable for those who don’t want flashy awesomeness.

Finished the new tournament registration system! Was hoping to release a video of the whole process in action, but the only video I managed to record ends with me not meeting the rank requirements (and getting an error message to the face). Needless to say, it will be live on Monday for everyone to view and test out. Actually, it already is, so if you’re cunning enough you can probably check it out for yourself :). 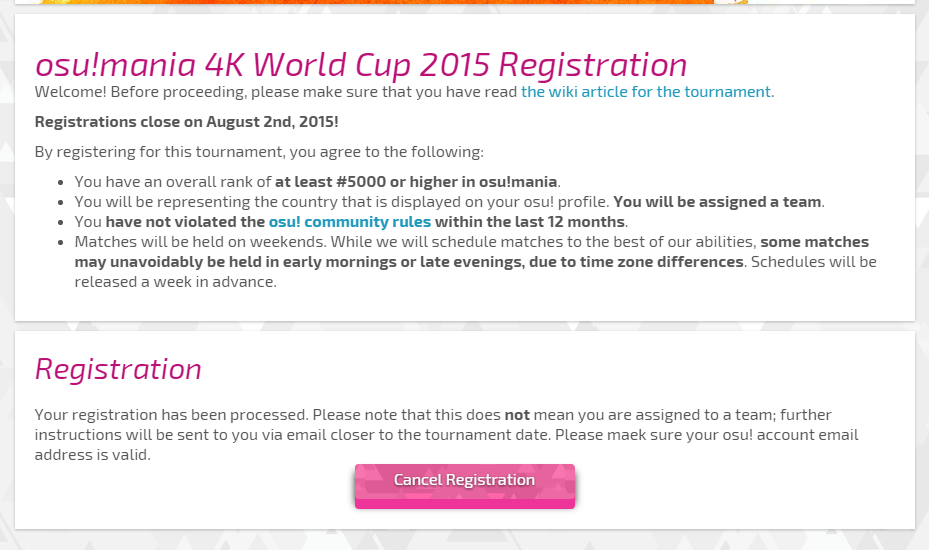 Thanks again for your questions earlier today on twitter. I will be posting Q&A mid-weekend as per last week, since that worked pretty nicely with my weekly schedule (and means you get 6 posts a week instead of 5).

Made some more good progress on the tournament listing/registration system today. My desktop capture app is a bit broken so nothing to show, but you will see it soon enough as we open registrations for the next official mania world cup early next week! Also fixed a few more issues with the osu! client (combo bursts look correct again on the new draw system).

I had a couple of requests to make web-based audio previews use html5 audio rather than flash, and as someone recently linked me the horribly simple implementation to do so, they are now live on the current osu! web beatmap listing – just click a thumbnail. Youtube previews are also able to use html5 playback where possible, too. This should make the osu! site a 100% flash-free environment (which is great, considering the consistent stream of exploits found in flash)

osu! running on OS X natively is in a good state, and we are beginning to look at ensuring the update system works so we can do some public-faced testing.

Nice to see the occasional map come out which isn’t focused purely on difficulty, has a good sense of rhythm, no overmapping and some really nicely suiting custom hit sounds. Check out MAGIC! - Rude mapped by XeroiZi HD for a map that I can get behind :).

Between participating in an osu!talk session with flyte (our second together so far; listen to the first here), celebrating a friend leaving the country and figuring out issues with my local development environment, I ran quite short on time today. Most of my productive time was funnelled in to the new tournament registration system, which needs to be ready for the upcoming osu!mania world cup. Here’s a preview: 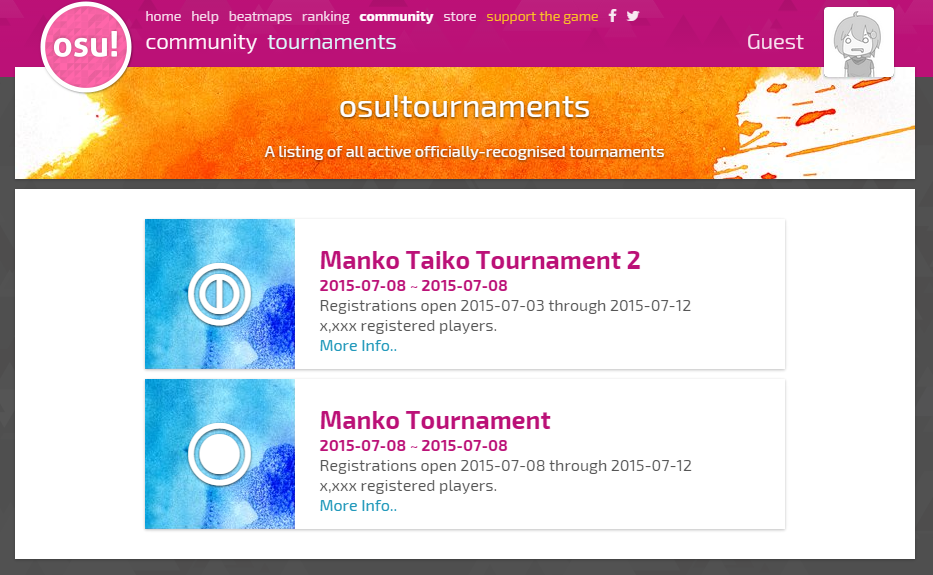 Today I started to tackle the few remaining areas where our new draw hierarchy was still failing: input and options. In the process, I learnt that osu! currently has almost 400 different unique options in the options menu. That’s quite a lot.

The current options menu is probably also the most advanced UI system in the whole of osu!. How do you guys like it? Are you making use of the search-anything functionality it offers? Do the tabs serve their purpose in allowing quick access to specific options groups?

We we are finally approaching the stage that this branch can be merged into master and pushed to cutting-edge for public testing! All that remains to fix are some gameplay issues (resizing of sprites based on active mods, flashlight overlays, sliders).

This turned out to be quite a huge project, but is a necessary evil to fix before open-source is considered (not to mention a prerequisite for osu!next design implementations!).

I’d show you more videos of breakage, but everything is working as expected ;).