Some minor (but long overdue) changes to the beatmap info wedge

Note that this isn’t the final design still (there’s a lot more refinements that are waiting in the todo list!), so keep an open mind for the time being!

You will now be able to see beatmap fail/retry times and online ratings if you are logged in. They are cached only until you exit song select once, but will definitely be cached for longer in the future. You’ll notice the display dim while it’s fetching new values from the intertubes.

The last tab you were viewing at song select is now also remembered between startups.

Tom94 seems to have gotten a bit restless while on vacation and implemented the basics of rigid body physics simulation in osu-framework (see #656)! I won’t even begin to pretend that I understand the math behind this, but the implementation looks pretty solid. 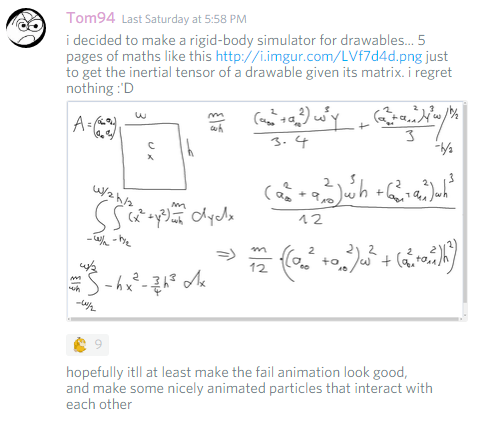 Not sure how often we will use this in the case of osu!, but at very least the fail animations could be a lot more interesting than before!

Let’s wait another day so the above changes can be completely reviewed and added!

Double Time, Nightcore and Half Time are now active! You can hear the effect of these mods from the song select screen, too.

Had a few requests to add universal offset support, so it has been done.

Yesterday a new version of the (logged out) home page design went live. Go check it out here (make sure you’re logged out!). Disqus beatmap comments are on the new site

Go check out the updated beatmap page design, now featuring comments. We’re slowly reaching a point where we can switch over to the new site.

2017.421.0 is now available from github releases (or via auto-update if you already have lazer installed)! Contains everything mentioned above (bar localisation and hitsound improvements).

After multiple iterations, we have a working tooltip solution via this pull request. A combined effort between myself and jorolf, these new tooltips should reflect what we used to have in osu-stable but at the same time add a new feel via animations.

Note that these are not heavily deployed throughout the interface yet; this will happen over time.

2017.420.0 is now available from github releases (or via auto-update if you already have lazer installed)!

This build sees the initial release of the results screen to the public. As mentioned multiple times, the design is not yet complete, but it’s a huge leap forward from what we’ve had until now! You can click through to the results screen from leaderboards at song select, or play a map and experience it for yourself.

Chat is now working in both directions

Gave chat a bit of attention so people using lazer can begin to discuss things in-game. Currently chat is limited to a new #lazer channel, which is only accessible from the lazer client.

Working with the osu-web team to bring all the data required by the client into the client. This included a few chat fix-ups for the feature above, along with changes to the structure of scores to allow for receiving score data in a way that is ruleset-agnostic.

While it’s in a stable state, it won’t be arriving this build. Let’s hope it’s in tomorrow. You can see that it now displays hit counts as you’d expect, at least! 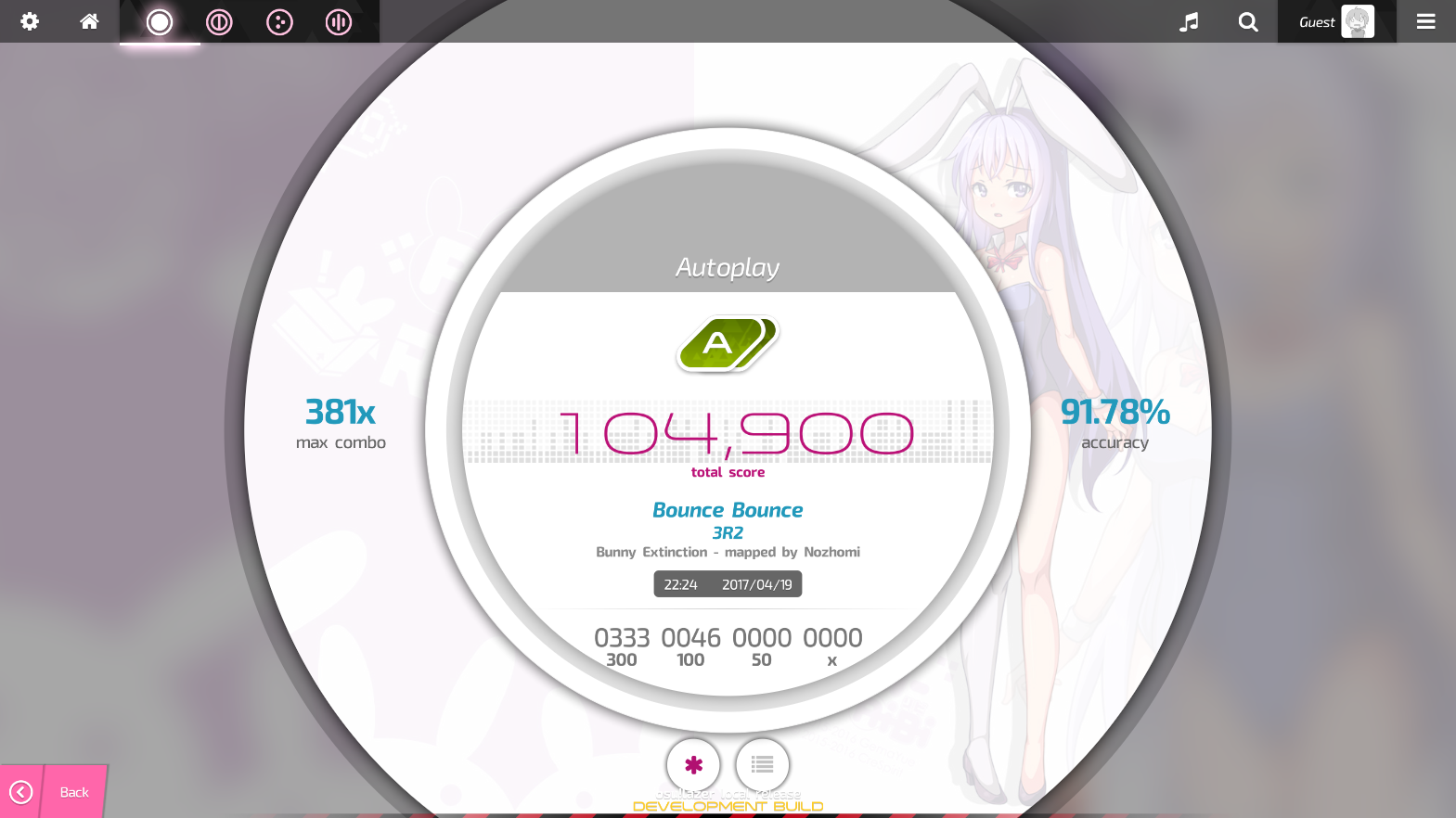 2017.419.0 is now available from github releases (or via auto-update if you already have lazer installed)!

Note that this release will reset your beatmaps as we have restructured the client’s database extensively for modular ruleset support. Please re-import your maps. Also let me say again that the results screen won’t be in until the next build, as it is still under review.

Thanks for following along!

Quite a bit to cover today!

Until now, when triggering a retry during play the game would actually be nesting a new screen inside the old player. While this was a very easy way to implement retry logic quickly, it also cause what could be classified as a memory leak if you retry too many times.

ocboogie is a new contributor who has been working over the past few days on fixing this problem. With a bit of guidance he succeeded in improving this process by a fair amount.

I also took the opportunity to clean up the transitions a bit (a touch faster metadata display too, for those of you complaining about having to wait the whole two seconds it displayed for).

If you’ve been using lazer, you may have noticed that online beatmap rankings are no longer being displayed. This is due to some changes in the backend API that I’ve been working through with nekodex which got pushed live today. The API changes will allow for things like country flags, mods and more to also be displayed.

I will be working on bringing the lazer code up-to-date with these changes tomorrow.

smoogipooo has been hard at work on following up the modular rulesets with better support for converting between rulesets. This allows for some awesome possibilities, like converting from mania to taiko.

The song progress bar that has been sitting at the bottom of the play interface since last week was actually quite restricted in how it could be used. You couldn’t change the vertical height, it couldn’t be displayed in any location other than the bottom of the screen and it had a fixed height.

I took a fair amount of time today refactoring it to be more flexible and re-usable, primarily to make it also work on the results screen. In this refactor I also fixed the display to correctly scale the the maximum density value, where before it would just clip higher values off the display (causing 100% filled displays on harder maps).

We’re almost there. While the design is not yet fully realised, the remaining elements are going to take some more work on the framework (masking and shaders). As such, I’ve submitted my results screen code for review and we should be seeing this go live this week, all going well!

Tomorrow, I’d say. There’s gonna be plenty of new stuff in the next build!